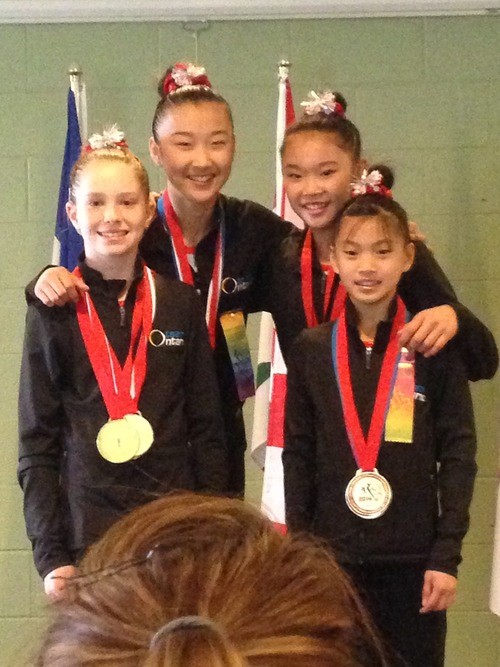 Our 2020 competitive season was cut short due to the global health pandemic. However, shortly before the closure we are proud to announce that the following T and T athletes had all qualified to represent Team Ontario at Eastern Canadian Championships; Ori Manor (who also ranked 1st in the province), Kasia Macknevych, Naomi Smeets, Marissa Latzel, Elizabeth Brooks and Cailtin Graham! We are proud of your accomplishments athletes!

ANIKA SPENCE earns a perfect 10 on Balance Beam at Level 5 provincial championships! She is this seasons All around Champion, Bars, Beam and Floor Champion! Her and teamates Giselle Jarosz, Severin Cliff and Sofia Badescu earned second in the province (only to Gemini) for the team award. Giselle is also this seasons Bars Champion. Isabella Vida is the level 6 Bars Champion, All Around Bronze Medalist and earned a Trophy for the artistry and confidence of her beam routine as did Caitlin Graham in the younger age category. Kaya Nishi is the Level 6 Provincial Beam Champion! Sophie Mitchelle is this season's Level 7 Bars Champion! In Trampoline Emma Wright again helps Ontario to medal at Eastern Canadian Championships this season and is the Provincial Trampoline Champion! Our team accomplished so much this season, despite having to move the gym mid year! Way to go Atheltes and Coaches!

SADHBH DOORLEY earned a spot and competed with Team Ontario in January in California, where she earned the Silver All around and helped Team Ontario earn GOLD! Sadhbh is also this seasons ALL AROUND and BARS Provincial Champion! Tahanna Raven Lo age 10 level 6 is this Season's Vault Champion and all around and Bars Silver Medalist. Sianna Morales eared Silver on Bars at Provincials in the 11 year old catergory. All of our competing WAG athletes qualified to Provincials this season and most of our level 4/5's are ranked top 10 in the province going into provincials. In the T and T side, Emma Wright and Naomi Smeets qualified to the finals at Eastern Canadian Championships where they both helped earn a silver medal for Team Ontario and Emma placed 6th in Eastern Canada on Double Mini!

Sadhbh Doorley is this seasons Provincial Vault Champion in the level 6 age 15 category! Sadhbh also earned the All Around Gold medal for her performance in Ohio. Tahanna Raven Lo who is 8 years old and competing in her first season in level 4 is a two time All Around Gold medalists, and heads to Provincial Championships this week! Jake Gorman and Jigme Lhamo Tsering, both athletes and coaches, attended Eastern Canadian Championships in Double Mini this year in New Brunswick!

EASTERN CANADIAN CHAMPIONSHIPS and GOLD in ARIZONA! Results 2015/2016 Jigme Lhamo Tsering age 19 and Cierra Doorley age 16 have both qualified to Eastern Canadians to compete in Double Mini where Cierra earned a Team Silver Medal. Cierra earned the GOLD medal at her last provincial qualifier. Arbor Galati is this years Provincial Champion on the Double Mini! Sophie Wax age 13 Level 7 earns the Gold on Bars, Team Gold medal and Bronze on Floor while representing TEAM ONTARIO and T-Dot Tumblers in Arizona this season. Sophie also earned the All around Gold medal at her first and second Provincial qualifier and is this years Beam Champion! Sophie placed second all around in level 8 at the International Gymnix! Gabriela Berridge age 9 Level 7 earns the All around Gold with a clean sweep earning Gold on every event at her second provincial qualifier! In addition she medaled on bars and beam at Provincials finishing 4th All Around. Gabby will be competing in the Pre-national Aspire program next season! Keliyah O'giamien is this years Gymnast of the Year!

For the Second year in a row, T-Dot Tumblers earns the Competitive Team award for being in the number Two Competitive Club in Ontario behind Guelph!!! This year saw Ruby Brubaker-Plitt Level 5 age 10 as the All Around Provincial Champion as well as the Beam Champion. Ruby has earned 5 All around Gold Medals this year. Olivia Nitti (above group shot) earned a spot on Team Ontario and traveled to Las Vegas where she earned the Gold Medal on Bars and helped Ontario to earn the 1st Place Team Trophy. In Barbados we had a clean sweep with our Level 6 team winning the 1st place trophy; Emma Pimentel took the All around Gold, Bianca Aghar the Silver and Alayna Handiak the Bronze. Sadhbh Doorley also earned the all around Gold in Level 7. Emma Pimentel age 10 (photo above on Beam) also being a four time all around Gold Medalist this year, was ranked 2nd in the province heading into Provincial Championships where she won the trophy for best artistry on Floor. Sanja Skoko, who represented T-Dot in the Level 8 beam and bars finals, earned the All Around Gold medal at her last invitational of the year in Level 9. Bianca Aghar is this year’s Gymnast of the Year! 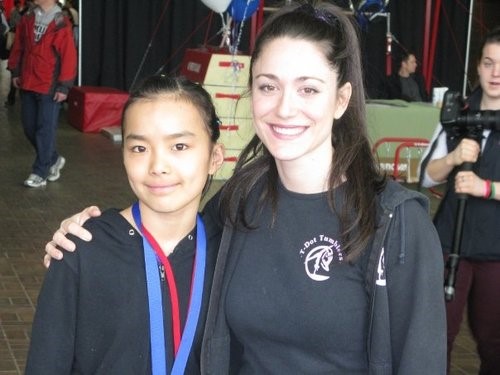 3rd PLACE TEAM TROPHY at 2009 Gemini meet! Julia Shantz brought home the Silver medal on Floor at the 2009 Provincial Championships and Danielle James took Bronze on Vault! Both girls also won the special recognition award on their respective events for the most outstanding performance in their categories! All of our provincial team this season qualified for Ontario Cup or Championships! Jigme Lhamo Tsering won Gymnast of the Year!

Kasey Peter earns the ALL AROUND GOLD at her first Provincial qualifier in level 7. She also took home the All around Silver medal at the Magical Classic in Florida with a GOLD medal on the bars and silver on floor! Kasey also took the all around Gold in Montreal this year at L’international Gymnix! Finally she earned the prestigious judges award for technical excellence when she moved up to level 8 at the end of the year in Oshawa taking the all around silver. Sara Cristiano (level 6 age 11) takes All Around Gold at her first Provincial qualifier with Gold on three events. Sara earned the Silver medal on bars at Championships. She also earned gold on every event and all around in Burlington! Sanja Skoko (level 8 age 12) placed on three events at Championships and took the all around gold in Oshawa! Julia Ma (level 6 age 12) earned the All around GOLD medal in Montreal at L’international Gymnix! Julia also earned the Silver medals on vault and bars a well as the all around bronze medal at Championships! She also clenched all around Gold in Burlington! Julia is this years Gymnast of the year!

SARA CRISTIANO is this years EASTERN CANADIAN all around CHAMPION and Bars Champion in the Novice 3 category! Her and teamate JULIA MA also helped to earn the Team GOLD MEDAL for Team Ontario! Sara also earned the Bronze on Floor, 4th on Beam and 5th on vault. Julia earned the Silver on Bars, Bronze on beam and 6th all around. Provincial Championships was also a success! Olivia Nitti earned the title of this years All Around Provincial Champion for age 12 level 5! She is also this year’s Beam and Bars champion! Also, in the level 7 age 12/13 category both Sara Cristiano (who placed 3rd all around) and Julia Ma (this year’s Vault Champion!) both qualified to represent Ontario at Eastern Canadian Championships!!! Hannah Chan age 10 level 5 and Julia Carmichael Morton age 13 level 5 each earned the All around Bronze Medals. We also earned trophies on Bars as well as Beam for Mastery of Artistry! See our women’s competitive team perform at the Toronto Raptors half time show at this link: http://youtu.be/JNb3k-RvYJ Congratulations to Julia Ma who brought home the bronze medal this year from FLORIDA and the Gold on Vault and Silver on bars! At L'international Gymnix in Montreal this year, we came home with four All around Gold Medalists; Bianca Aghar P2 Argo, Hannah Chan P2 Tyro, Olivia Nitti P2 Novice, and Sara Cristiano P3 Novice! This year’s gymnast of the year is Margaret-Anne Konop! 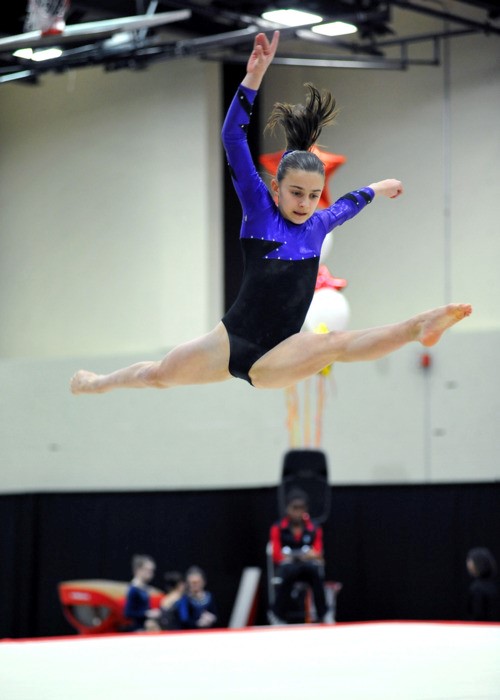 SANJA SKOKO (above photo) takes the ALL AROUND GOLD medal at L’international Gymnix Montreal in the P3 category where she also brought home the Gold on Vault and Bars and the Bronze on the floor! Sanja also took the all around gold in Oshawa at the end of the year, earning the prestigious judges Technical Excellence award! Sanja is this year’s Gymnast of the year! In the same level, teamate Kasey Peter took the all around Silver in Montreal. Kasey also earned Silver Medal on Bars at Provincial Championships this year with a score of 13.0 and teamate Sanja just 0.05 points behind her. Jigme Lhamo Tsering (level 8) takes the All Around GOLD medal in FLORIDA at the Disney New Year’s competition! Jigme also clenched the Gold on Floor, Silver on Vault and Bronze on Beam! Jigme also earned the All around Gold in Muskoka at her third provincial qualifier.

We welcome Michael Toke to our coaching staff! Michael comes to us with 50 years of coaching experience and has coached numerous provincial and national champions over the years! His expertise and experience is helping our athletes soar to new heights…. literally!

JigmeLhamo Tsering qualifies as an alternate for Team Ontario! She placed 7th out of over 70 athletes from across the province, while taking the Bronze on Bars! GOLD ALL AROUND: After taking the All Around Gold at three consecutive competitions this year including the International Gymnix meet in Montreal, Jigme also went on to place 5th in the Province at Provincial Championships! She brought home a 6th place on both vault and floor and took the BRONZE medal on the Balance beam! Finally, she took home the Gold on both Vault and Beam and Bronze on Floor and All Around in Level 8 in Oshawa! Sarah Franco also earned Gold all around for the second year in a row in Montreal with teamate Kasey Peter close behind her with All around silver! Olivia Nitti has earned the prestigious judges award for Technical Excellence for the second year in a row at Gemini! Madelaine Potechin is this years Gymnast of the Year!